Photos From Our Recent Travel Seminar in Guatemala and Chiapas

Critical Issues in the Borderlands Week 3: A visit from Nogales’ Mexicayotl Academy Students, Operation Streamline and conversations with the End Streamline Coalition

The morning of February 20, 2015, marked the ending of week three here in the borderlands and the beginning of our third Critical Issues class. Approaching the day ahead I had mixed feelings. I was really excited to meet the Nogales Mexicayotl Academy students and felt sort of reserved and unsure of how exactly I felt or what to expect during the visit to Operation Streamline that would follow.

I left my house earlier that morning because I decided to take a different route and wanted to grab breakfast before arriving to class. To my surprise my host family’s dog, (who might I mention has never showed interest in bonding other than her daily jumping on me and attempt to use my shoes as teething toys) decided to go on a morning stroll with me on my way to school. My host siblings said she would turn around eventually and not to worry…twenty minutes later with the help of a gentleman who enlisted his services after witnessing the struggle of trying to get her from weaving in and out of traffic, she was safely retrieved and I walked her half way back to the house where my host mom met me and took over from there.

I finally made it to class just in time to meet my classmates at the streetcar where we then headed to the University of Arizona Education Building. Once we arrived, one of the teachers of Mexicayotl Academy introduced us to the students and gave us a brief overview of the school. The director shared with us the principals with which they teach and use at their school called Tequio. Tequio has four principles:

Here in Tucson, my field study placement is at Mexicayotl Academy Tucson. The Tucson academy has been open for two years and currently enrolls kinder-4th grade but starting next year it will extend to 5th grade. Mexicayotl Tucson and Nogales are dual language learning, charter schools that focus on encouraging and providing an intercultural education as well as promoting green world ideologies. It was inspiring and exciting to hear and learn from the Nogales’ students and to see a glimpse of what the students are doing in Nogales.

Visiting with the Nogales Mexicayotl Academy students brought upon a variety of emotions and sentiments that I can not exactly grasp, but I was able to understand a little when I contextualized them according to my experiences so far in the borderlands. I was inspired by the students’ knowledge, passion and ability to articulate their thoughts clearly and also their ability to conduct research and give well organized presentations on different aspects of the border and life in the borderlands. As middle school students they are exposed to things that I probably would have never been able to experience, learn or even be exposed to if I did not choose to come to the borderlands and learn about the history and complexities of “the border”, migration, immigration, politics, economics, race, discrimination, class, industrialization and life on both sides. The students on the other hand do not have the choice of whether or not to experience many of the things we have been hearing and are learning about, for example run-ins with Border Patrol on their way to school and a constant visual reminder of “la frontera” and all that it has brought with it. After the presentations we had a question and answer session amongst both groups before we headed back to campus for a lunch break. We discussed several things including how the students felt about Border Patrol and their presence, daily encounters with them, the hassle and wait time to cross the border to go to school everyday, and the benefit to people all over, not just those in the borderlands, to learn about the issues we are learning.

Before coming to the borderlands I did not realize the complexities of it all or that U.S. history is very intertwined with that of Mexico and some Central American countries, especially pertaining to the growth of industries and economic “development”. There are large sections of history often ignored and not taught in traditional school settings, leaving the majority of our youth and therefore general population ignorant to the complete history of our country, our home and its relations. Without having a good understanding of history, trends and other factors that contributed to today’s current realities, we are unable to make informed decisions or form valid opinions about larger issues. I think it is important to remember that indigenous peoples originally inhabited the United States, all other cultures and peoples who have also come to these lands are immigrants or descendants of immigrants, whether migration was forced or voluntary. Therefore all histories are important and essential to understanding current politics, economics and relations of the United States and their correlation to class, race, gender, sexuality, prejudices and discrimination.

After lunch we were supposed to go to Operation Streamline with Katie (our Towards Social Change teacher and field study supervisor), but it was cancelled because the courtroom was being used to swear in people who passed their citizenship tests. The irony prevailed as we attempted to even try and process the contrast of events. It was thought to be ironic because throughout the week that same courtroom is used to trial up to 70 migrants a day for illegal immigration and yet it was closed to celebrate those who immigrated to the U.S. and are now gaining citizenship.

The following Thursday afternoon, we all gathered on the front stairs of the DeConcini Courthouse. I was initially shocked when Google Maps showed the courthouse was located in the middle of Downtown Tucson. I expected it to be ducted off in the corner of town, far away from civilization to avoid attention but there is really no need because I, like a lot of people here in Tucson, had no idea of its existence. Therefore, I would have never thought to ask questions or ponder its whereabouts. A member of the End Streamline Coalition and employee at the American Friends Service Committee met us on the front stairs and gave us some brief background knowledge about the proceedings of Streamline, informed us of his organizations affiliation, some things to expect and an overview of a few of the legal logistics.

The immigrants who appear before the Streamline judge are being charged with either 1325- illegal entry (a misdemeanor) or 1326- illegal re-entry (a felony). Those trialed are sentenced to 30-180 days in a prison before being deported back to their country of origin; but if charged for re-entry you could receive up to 5 years. Border Patrol decides whether those apprehended for what is known as “illegal immigration” are immediately deported, sent to a detention center or sent to Operation Streamline. Border Patrol has records of those they apprehend and are able to prove cases of re-entry for those being trialed for so.

Inside of the courtroom there was only a small section in the back right corner for the people to sit in and witness the trials. I should say hearings because we learned that these are in fact not trials and that most of all things have already been previously decided. It became really hard to bare witness as we watched as groups of the migrants approach the microphones. As they walked the sounds of chains rattling at their hands, feet and waists resonated through my ears in the background. A group of lawyers filed behind the defendants and the judge began to address each person: verifying their name, reason being trialed, how do they plead and the number of days they would each receive in prison before being deported then if they had been threatened or promised anything to plead a certain way. After the first three groups, it begin to appear routine; what to say, how to respond and how to proceed. One man, when asked if he had anything to say, said he was afraid to return back to his home country, Honduras, and was seeking asylum. The judge told him that there was nothing that he could do at this moment and that it would have to already been done before now because it was a criminal hearing and that was in fact an immigration issue. He proceeds to ask if the man accepted his charges and carried on. The tone of the courtroom appeared very systematic. Many sitting in the back and or sides of the courtroom appeared either disinterested or very unconnected from the events occurring before us, and I just couldn’t help but begin to feel numb to the proceedings because I realized there was really no other answers other than “cupable” or “guilty”.

After visiting Operation Streamline questions and thoughts regarding systematic oppression, criminalization and mass incarceration roamed aimlessly through my head along with pondering about ‘what is democracy?’ After leaving Operation Streamline we visited El Tiradito, the only shrine in the United States dedicated to the soul of a sinner of a  love triangle. El Tirado is not seen as a negative place but rather one of hope; it is where many come to make and leave wishes. We concluded the day by sharing, reflecting on feelings or observations and asking any remaining questions we may have had. Before leaving we each took a moment to reflect and wrote down wishes that we left in holes of the remaining wall on El Tirado.

Although some things are hard to swallow or bear witness, it is important to become aware and informed of the many things that occur and affect not only ourselves but also those around us and of our community at large. The first step to combating injustices or understanding inequalities is becoming educated of such things and understandings one’s own contribution and role in society in regards to these issues.

Below are some photos of the Border Studies Program at El Tiradito after bearing witness to Operation Streamline. We have no photos from our time at Streamline because no one is authorized to take photos and visibly share what happens inside the Streamline courtroom. 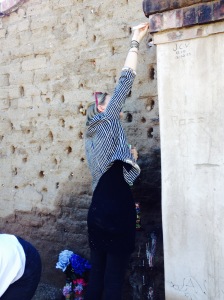 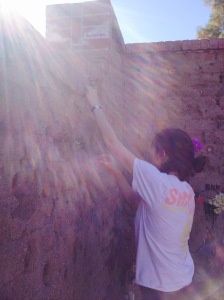 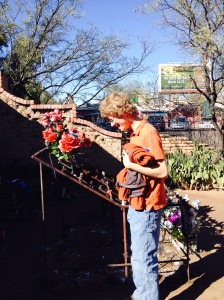